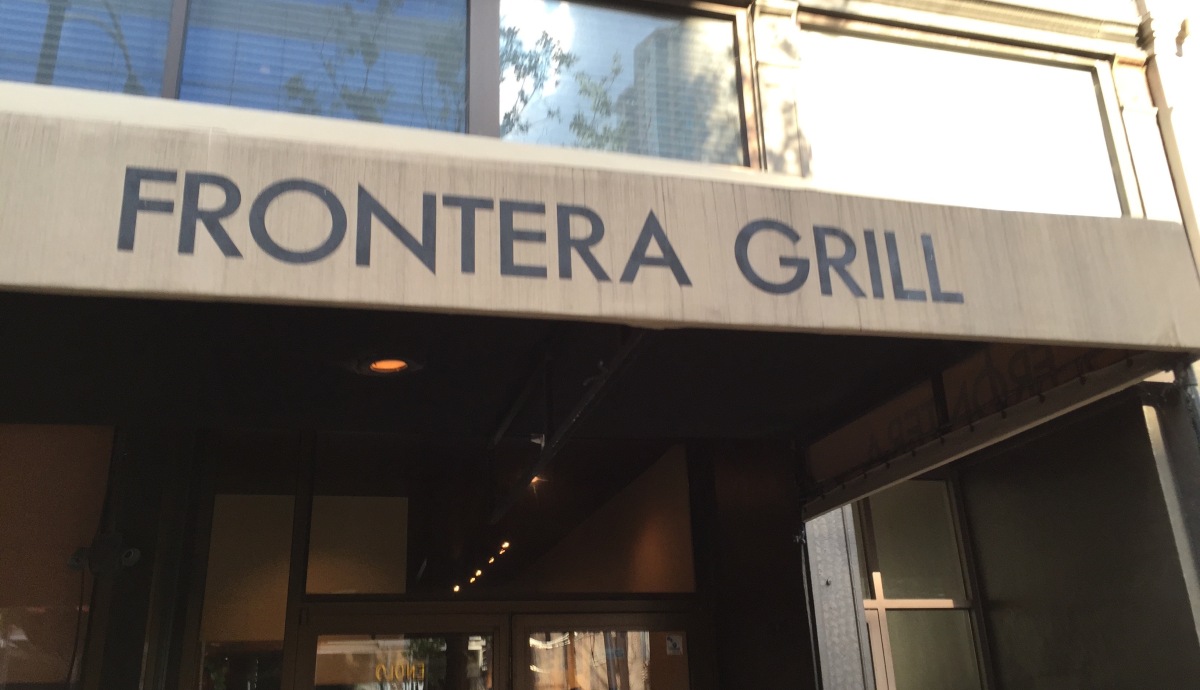 Frontera Grill is Rick Bayless’ flagship restaurant, and one that I had been wanting to visit for many years. Bayless is considered one of the top experts in Mexican food, having lived in Mexico for several years back in the 1980’s. He continues to take his staff on yearly “food missions” to Mexico to this day.

The meal began with a complimentary small dish of seasoned nuts, including peanuts and pepitas (pumpkin seeds). They were nicely spiced, but not hot.

Warm corn tortillas were also provided with two types of salsa. The tortillas were nice and fluffy with some texture to it. The salsas had some spice to it, but again was not hot. I really liked the green salsa, although the red was also good.

The Topolobampo Tortilla Soup ($8) is different than most tortilla soups, in that the broth is clear rather than having tortillas blended into the soup itself. The soup seemed to lack was good, but the pasilla chiles did not impart a lot of heat. The chicken remained moist, but the soup seemed to lack any real depth of flavor. I prefer the chicken tortilla soup by Dean Fearing immensely.

The Classic Queso Fundido ($8) is a skillet of melted Jack cheese, roasted peppers and green chorizo. The cheese was melty good and stretchy, the peppers adding just a bit of punch, while the chorizo added some texture and meatiness to the dish. I really liked this dish, and would order it every time.

The Mexican Street Corn was good, but was a little disappointing as it seemed too “formal”. The corn was not slathered in mayo to the point of being overloaded. There was an ample amount of queso fresco however. The addition of epazote added some herbal pungency.

The Chile Rellenos were incredibly huge. Battered and nicely fried, they were swimming in a pool of tomato based sauce. They were nicely stuffed with shredded pork and cheese. The dish came with a side of black beans and rice, which were also good. This is a solid dish, and is very hearty.

The Carne Asada Brava included slices of perfectly cooked, tender and flavorful beef. It was paired with a sweet tamale, which could have been a little sweeter for my taste. The salsa also imparted a lot of flavor but not much heat.

With my years of anticipation to eat at Frontera Grill, it fell slightly short of my expectations. The food was good, but was not “wow, what have I been waiting for all of these years!” good.

I would like to try Topolobampo on my next trip to Chicago for comparison sake though.