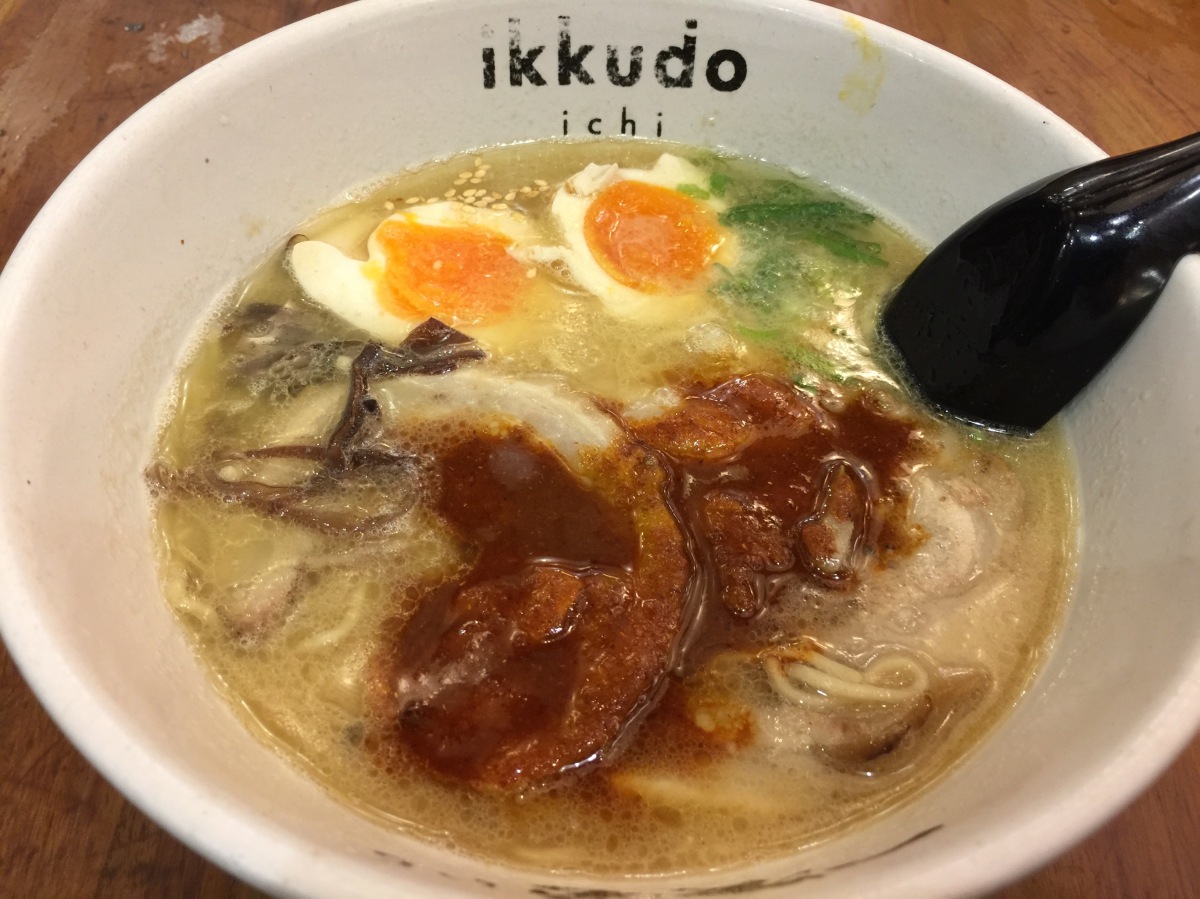 Ikkudo Ichi is one of the most highly regarded ramen shops in Jakarta. This despite there being an Ippudo ramen in town.

The restaurant is located within the Grand Indonesian Mall.

The ramen is fairly large compared to what you would find in most ramen shops in Tokyo. In addition to regular tables, there are tables that have a small “divider” for the sake of solo diners.

Although Ikkudo does all types of ramen including tonkotsu, shoyu, miso and tsukemen, it appeared that the tonkotsu was their specialty. The waitress told me that tsukemen was their specialty, which seemed an oddity since it a very specific subspecies of ramen that not many places do well.

The broth was opaque, but didn’t have the depth of flavor usually associated with tonkotsu broth. The noodles were on the thinner side and had a decent amount of chew. A brown sauce spread throughout the broth like an oil slick. Although it was supposed to be spicy, it kind of tasted like a chili laden tonkatsu sauce. The kind of chili that leaves a bitter taste in your mouth.

Another thing that stood out was the very sloppy plating. The egg was fairly good but the yolk could have been runnier. The other thing about the hard boiled egg was that it did not peel well, and it looked like rats had taken small bites out of the egg whites.

The tonkotsu at Ikkudo Ichi was average at best. I am not sure how this place is so highly regarded. One of my friends however, asked me where I got my information about this place and said there’s no way it would have been one of the more highly regarded ramen shops.

Hakata Ippudo, the famous Japanese ramen house, has opened several locations in Kuala Lumpur. The one at Pavilion is not inside the mall, but sits on the outskirts where many bars and restaurants are located.

Ippudo is known for their tonkotsu broth, which is pork based. Noodles from the Hakata region are also typically straight and thin.

I decided to go with the Shiromaru Motoaji (RM22.90), which included their original tonkotsu broth, thin noodles, pork loin, bean sprouts, kikurage (wood ear mushrooms), and spring onions. I added a salted soft-boiled egg (RM2.50) to my ramen. The broth has the familiar milky hue associated with stock made from pork bones which have been simmering for long periods of time. The broth had a nice porky flavor, but did not have a lot of residual oil that coated your mouth like many tonkotsu broths do. In essence, this was a somewhat lighter broth. It wasn’t too salty either. The pork loin was nice and tender.

The soft-boiled egg could have been cooked a tad less for a runnier yolk.

The famous Pork Belly Bun (RM7), which is served with their spicy sauce and mayo was a bit of a disappointment. The pork was tender and flavorful, but the bun was rather thick and “bready”, which seemed to envelope the pork too much. There was also way too much mayo for my liking.

Hakata Ippudo churns out some very good ramen. I can sort of see why lines at the New York branch can stretch for a couple of hours, but I would never wait in a line that long. A gripe that I’ve seen at the Kuala Lumpur branch is that the cost is way too much. For Malaysian standards I can somehow see where people are coming from, but compared to the New York branch where the same meal would set you back over $30 USD, this is a complete bargain at less than half the price.

Big news shocked the culinary world late last year when a ramen restaurant was awarded one Michelin star. Yes, the humble bowl of soup favored by salary men and tourists alike given the loftiest of culinary awards.

Once the news hit, the lines at Tsuta reportedly jumped from a normal one hour wait to up to four hours. Given that Tsuta sits in a mostly residential area, neighbors were starting to complain about the long lines and noise. Tsuta is located only a few minutes away from the Sugamo station. A new “system” was put into place to help quell the long lines and seems to have worked well, but some effort is needed in order to slurp a bowl of ramen as they only serve 150 bowls per day.

I had heard that things had somewhat slowed down since the Michelin announcement. In order to obtain a bowl of ramen, you must “buy” a ticket by paying a ¥1000 deposit, which is refunded when you show up for your bowl of ramen.

Although the restaurant officially opens at 11:00 AM, I arrived a little after 8:00 AM and was able to secure a ticket. I was given a yellow ticket and was told to come back at 12:00 PM. After the Michelin announcement people were starting to line up at 6:30 AM in order to get a bowl of the limited bowl of deliciousness.

After arriving at 12:00 PM, I waited another 15 minutes or so before being admitted to the restaurant and buying my ticket for my bowl of ramen. Like many ramen shops, you will buy your meal through a vending machine and then hand your ticket to the staff.

I selected the ramen that put them on the map, the one on the top left. In addition, I ordered a bowl of roasted pork and rice. For ¥250, this is a steal.

The restaurant is simply decorated, and only seats 9 patrons.

The bowl of roasted pork and rice is actually a decent sized portion. Before serving, the pork is bruleed and topped with garlic and herbs. The pork is well cooked, tender and flavorful. The garlic added a nice bite of flavor. In retrospect, I should have ordered 2 bowls of this, or 5.

The ramen is the star of the show, and rightfully so. The broth is a complex brew of chicken stock, several types of shoyu (soy sauce), pork stock, red wine and fish stock. The bowl has a golden brown hue with pools of glimmering oil, large pieces of menma, a tanned egg, four pieces of thickly cut pork layered in staircase fashion slowly descending into the broth. Oh yeah, you can’t forget the little dollop of truffle oil. A small pile of negi (green onion) finishes off the dish.

Upon first sip, the first thing I noticed was the fish stock. It hit me like a ton of bricks since I wasn’t expecting it. The fish stock then faded into the background. The chicken then became prominent, along with the strong, but subtle punch of red wine. The pork stock is very similar, but the blends of different shoyus added a nice salinity and complexity. The menma was thick and chewy. The pork was cooked superbly and was very tender. The truffle oil added a bit of extravagance, and the negi a nice freshness, and a little bit of bite.

This is by far the best bowl of ramen I have ever had. It is also the most unusual and complex bowl that have passed my lips. It has been a while since I ate at Tsuta, but I still think about how good this ramen is. 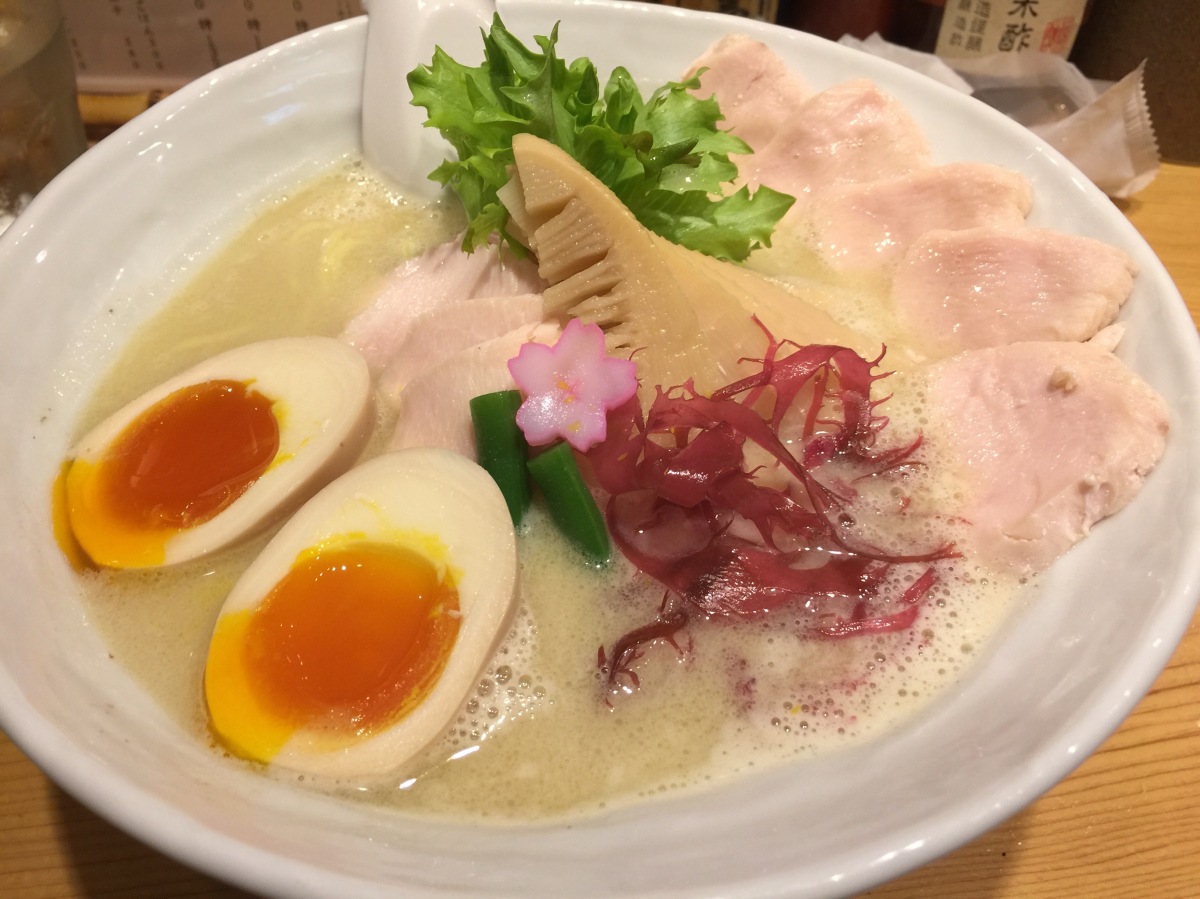 Ginza Kagari is located down a lonely, unmarked alley in the Ginza neighborhood and serves an unlikely type of ramen, chicken. Even the sign is somewhat deceiving, as it simply says “Soba”, yet they are more known for their ramen, although they do serve soba buckwheat noodles here. You know if you are in the right spot, if you just happen to see a lot of people in line waiting in front of nothing… The line starts on the main streets, before it takes a right and snakes down the alley. Perhaps an easier way to find it is that it is located almost directly across the street from the Apple Store.

Once inside, you will notice that the restaurant is very, very small. The counter forms three fourths of a square, and only seats eight. You will almost undoubtedly be looking directly at somebody while eating.

The dish that has made them famous if the Tori Paitan, which is a creamy chicken ramen. I ordered the large (¥1050) which comes with three slices of chicken and vegetables. I ordered extra chicken (¥300), a soy soft boiled egg (¥120) and bamboo shoots (¥250).

I was presented with a large bowl of creamy, frothy broth glistening with vibrant colors of green beans, lettuce, and red seaweed. There was a pinkish star shaped item in the bowl, but I am not sure what it is. Underneath the broth is cabbage, which slightly wilts under from the hot broth.

The flavor of the broth is rich and deep. Like the best chicken soup your Jewish grandmother ever made, if she happened to be Japanese. The broth was not overly salty. The seaweed and green beans added a nice crunch, while the lettuce added just a touch of bitterness. The cabbage also provided some sulfuric earthiness to the dish. The eggs were cooked just perfectly, with the yolks slows running out of their nests like slow moving magma.

Before eating at Ginza Kagari, I had never had chicken ramen before. This almost made me a convert as it was lighter than a tonkotsu based soup. I would go out of my way to eat here again when in Tokyo.

Hakata Ikkousha is another ramen branch directly imported from Japan. They specialize in Hakata style ramen, which translates into a milky tonkotsu broth and thin, straight noodles.

The mastermind behind Hakata Ikkousha is Kousuke Yoshimura, who is very passionate and very devoted and obsessive about the ramen coming out of the kitchen.

The ramen has won numerous awards over the years including Ultimate Ramen Champion in 2011 and 2012, selling well over 100,000 bowls each year, and now has branches in the US, Taiwan, Singapore, Hong Kong, Vietnam, Indonesia, China, and Australia in addition to the branches in Japan.

TV’s throughout the restaurant played looped videos about Mr. Yoshimura, and Hakata Ikkousha’s ramen making and awards, along with huge signs in their quest for global ramen domination.

The menu is fairly simple and straightforward with only a handful of different ramen options, with additional toppings that can be added a la carte.

The broth has a deep, rich porky flavor that is not too salty. Perhaps that deep, porky flavors is due to the bubbles in the broth. The broth is poured from a height to give the broth its bubbles, and to help aerate the broth to expand its flavor, much like pulled tea in India.

The “God Fire” ramen is a combination of the tonkotsu with chile, that can be ordered from levels 1-4. The God Fire ramen looks like an angry bowl of molten lava, amidst the calming sight of the negi, mushrooms, egg and pork. The ramen is able to maintain its porky goodness, and is not overpowered by the chile thereby retaining its most important qualities.

Many times ramen restaurants that tout the spiciness of their soup are trying to cover up the inferior taste of their broth.

Hakata Ikkousha is a welcome sight to the ramen scene in the US, but I still slightly prefer Santouka’s ramen.