Zeller Bistro is one of the highly regarded restaurants in Budapest, and rightly so.

The interior has a charming, farmhouse theme with exposed brick walls, and rustic features such as a ladder on the wall, ladders used as shelving, and a heart shaped wreath made out of used wine corks. The light wooden planks also contribute to that farmhouse feel.

The tables also have a light hearted theme, and remind me of school desks. There is butcher paper on the table, and many people use the provided colored pencils to make drawings.

The menu is small, but appears to be focused on local ingredients and family favorites.

The meal started off with a basket of white and dark bread. The bread had a nice crunchy crust, and was very tender inside.

We ordered a bottle of wine, which also came with a playful presentation. It was served in a plastic bag filled with ice, and set upon on a small stepstool. The owner’s family has a winery, and this wine came from their vineyard. It was nice and fruity.

The Smoked Duck Breast came with a side salad of sorts with mustard seeds. The dressing had very floral notes, and the poached also had a distinct perfumed scent and taste.

The Mushroom Soup had a dark and brooding appearance with droplets of oil dancing on top. The soup had a very intense mushroom earthiness which was very pleasant. The oil and cream helped brighten up the dish.

The Crispy Fish had a playful presentation. Reminiscent of the fries you would get in Amsterdam, they were served in a paper cone. The fish were cooked perfectly, nice and crunchy without being greasy. It was served with a thin Ranch type dressing.

The Goose Liver Parfait came with homemade bread and slices of apples. The goose liver was velvety smooth, and a pleasant liver taste. It didn’t have that “metallic” twinge that liver often has.

The Pork Tenderloin was perfectly cooked, and remained moist and juicy. It was paired with a zucchini bulgur dish that had a nice chew to it.

The Burgundy Beef Cheek was fall apart tender. It had a great beefy flavor. The portio was also very generous.

The Carrot Cake was a nice, thick slice which was very moist and dense, yet somehow seemed somewhat “light” at the same time. There was a thick layer of cream cheese frosting topped with a massive amount of walnuts. The frosting wasn’t too sweet which was also appreciated.

This was by far the best meal in Budapest. The owner is very friendly, as is all the staff. The food is outstanding with very reasonable prices. This would be my “go to” restaurant whenever in Budapest.

Comme Chez Soi is a highly regarded restaurant in Budapest. In fact, it is rated the #1 restaurant by Trip Advisor.

We were in the area and decided to see if we could walk-in. We went at an off time so was hoping that would increase the chances of getting a table.

We were met by the owner Roberto, who told us to come back in 15 minutes at which time he should have a table waiting for us.

The interior is rather small, and the décor is rather busy. Tables are pushed closely together, but given how popular this restaurant is it is not surprising.

The meal started off with a complimentary half glass of wine, which was a generous offer.

We started with their version of Caprese Salad. Thick slices of tomato were topped with large chunks of mozzarella and a basil pesto. This was paired with slices of ham. The presentation was sort of clunky, but the taste was good.

Next were Croquettes stuffed with cheese. They were nice and crisp on the outside, and melting with gooey goodness on the inside. This was paired with a fried herb salad of sorts.

The French Onion Soup was presented differently than the normal crock covered by bubbling, and slightly browned cheese. This was served in a large flat bowl with a cheese raft floating in the middle. The soup was lacking the strong onion flavor with the undertones of a good beef stock. The onions were not deeply caramelized which I think contributed to that lack of depth of flavor.

The Spaghetti Bolognese was a thick pile of al dente noodles, smothered in meat sauce. The spaghetti was cooked well, and the sauce was good but could have used a little bit more salt for my taste. Overall, a good dish.

The trio of pasta, is a dish served with 3 types of pasta each with a different sauce. There is tortellini with parma ham and cream sauce. The tortellini were cooked nicely, and bathed in a thick cream sauce giving the pasta a punch of richness. The next pasta is penne all arrabiata which is pasta in a tomato sauce. This helped to cut down the richness of the tortellini and the next pasta, which was tagliatelle with mushroom cream sauce. The earthiness of the mushrooms helped to cut down on the richness of the sauce. This is a good option for those who are somewhat undecided on what to order as you can sample several different items from the menu all at once.

A lemon intermezzo followed, which was fresh and acidic, but just a touch too sweet for an intermezzo. The sweetness lingered on the tongue rather than waking up your taste buds.

The Chocolate Sponge Cake with vanilla ice cream was a rather large dessert. The cake was rather dense and moist, which was offset to a point with the blueberry sauce and whipped cream.

The meal ended with a couple of chocolates for the road.

Service was excellent throughout the meal. Roberto is a very personable guy, and tries his best to make everybody feel at home and welcomed.

Chess Restaurant has a pretty cool décor. The floor is black and white checkboard to mimic a chess board. There is also chess boards and pieces strewn throughout the restaurant to carry the motif.

The meal started with an amuse bouche of roasted beet and goat cheese. It was like a mini beet salad, and a nice way to open the meal.

The Beef Goulash was a nice and comforting dish on a cold night. The beef had broken down to help thicken the soup by releasing its collagen and was very tender. The root vegetables also lent to the hardiness of the dish. The red wine added another layer of flavor, while the noodles remained firm, and the beets added a freshness to the dish.

The Chess Salad contained a nice pile of ham set atop fresh, crisp greens. There were bits of sweet celery, garlic with a punch, and artichokes to provide some heft to the dish.

The Yellow Split Pea Soup was a little on the thin side. It was also kind of rustic as it wasn’t completely smooth, but did have good flavor. There was some paprika in the soup which added some warmth, along with chives to add a nice light onion kick. The soup also contained duck livers which added some extra earthiness and richness to the dish.

The Foie Gras Mousse was a contrast of textures and flavors. The foie gras was light and creamy, and set atop a duck aspic with chunks of meat shining through the gelatin. The foie gras was well controlled and did not overpower the dish.

The Saddle of Wild Boar had a nice gamey flavor that didn’t overpower the dish. The dish was paired with a wasabi meringue to add a kick of flavor and spice. This was offset by the waffle with ginger and honey. This was a well-balanced dish.

The Salmon was a little charred on the outside, but remained tender and flaky inside. The beurre blanc was rich and creamy, with a nice amount of acid. The deep fried shallots added a crunchy texture that contrasted the sauce. The salmon eggs also provided an extra brininess.

The Poppy Seed – Marzipan Souffle was somewhat surprising. Although it had risen like you would expect from a soufflé, the dessert was rather dense. There were a ton of poppy seeds in this dish, and if you are not a fan it would probably be overload. The poppy seeds were a bit much for me. This was paired with a carrot-vanilla sorbet, whose sweetness was controlled with the carrots. It was creamy, and provided a temperature contrast. The raisins also added an element of sweetness and alcohol.

The meal was finished off with a complimentary mango mousse, which was light and had just the right amount of sweetness. The mango shone through. Chess Restaurant is located on a little side street and can be somewhat of a challenge to find, but is only a 10 minute walk away from the Boscolo Budapest Hotel.

The Boscolo Budapest Hotel, like the Boscolo Prague, is part of the Autograph Collection, in the Marriott portfolio of properties. The hotel is fairly easy to get to via train and is located next to a convenience store, and many restaurants.

Upon entering the hotel, the front desk is on the right. Check-in was thorough, and I was advised that I could take breakfast in the New York Café as a Ritz Carlton Gold member.

The lobby is large and spacious, made to feel more so with the high ceilings and glass roof.

The hallways are fairly narrow, and feature marble flooring.

I was assigned to room 454, which is a rather large room. There is ample room to store your things and walk around.

Upon entering, the bathroom is to the right. There is a single sink with ample counter space. Like the Boscolo Prague, Etro products are featured.

There is a drawer built into the bathroom counter which held extra towels. I thought it was a good use of otherwise dead space, and wish more hotels would utilize this space similarly.

The shower/tub combo is exposed, as it is right behind the sink. There is no door between the entrance of the bathroom area and the shower/tub. There is a rainfall shower head, as well as a hand held shower head. Once again, a partial door was featured. With the shower/tub being so exposed staying warm in the shower was a bit of a challenge.

There is a frosted plate of glass separating the shower/tub from the main area of the room.

The toilet and bidet are separated from the rest of the bathroom.

Across from the bathroom is the closet, which is spacious.

The bed was very comfortable, with large areas on either side of the bed making the room feel bigger than it was.

A complimentary bottle of water was placed on one of the nightstands.

There is a sitting area with two chairs and a small table.

The desk is located close to the closet with a luggage rack in between. The desk was not very big, especially with the TV sitting on part of the desk. The Wi-Fi here was also abysmal. Outlets were not conveniently located within the room, but at least there were outlets by the desk.

There was a mini bar located in the cabinet underneath the TV, along with some snacks on the desk. 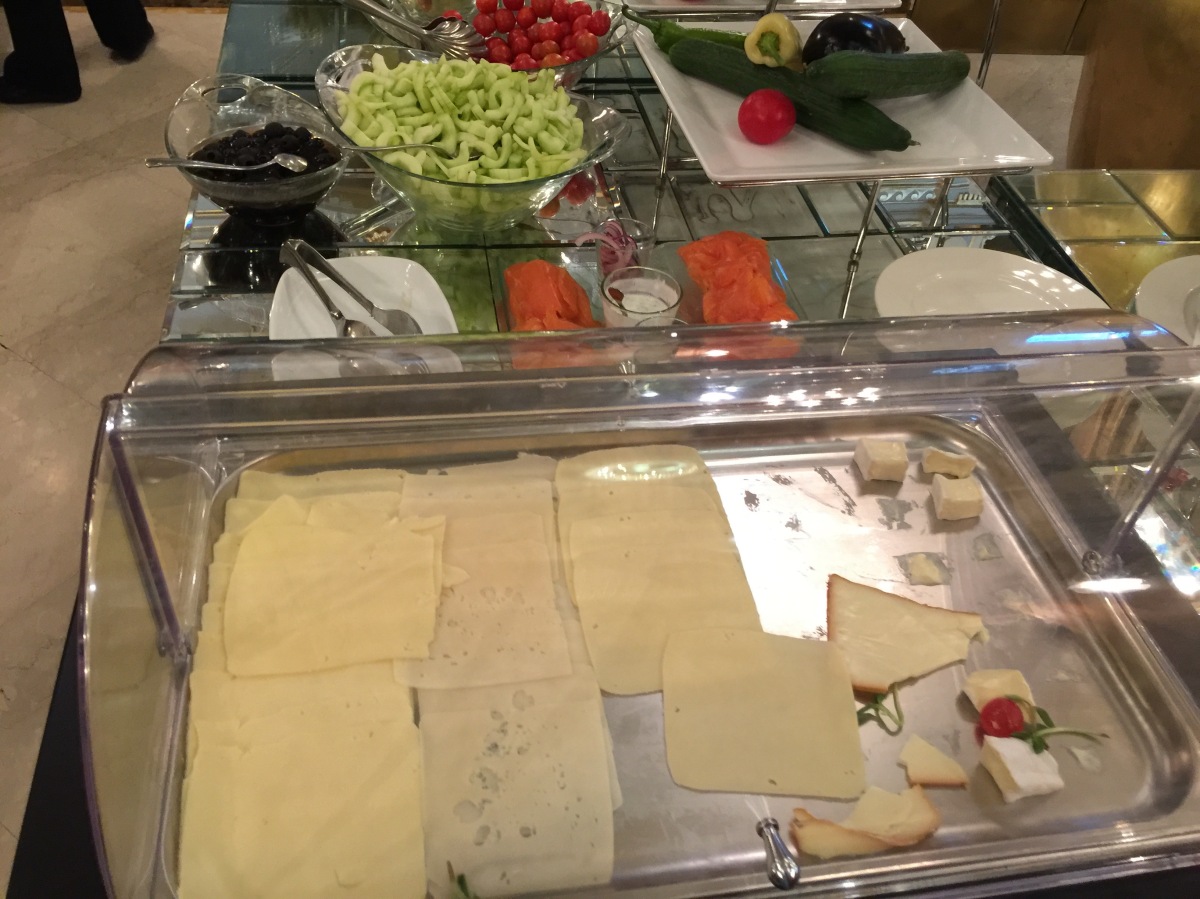 The breakfast buffet was fairly extensive, but was served in a very small area located very close to tables so trying to maneuver in such a small area proved to be a challenge. Food was replaced quickly, and dishes were also removed promptly. Service was quite good throughout given the number of people dining at breakfast.