The Istiqlal Mosque is the largest in Southeast Asia, which is not too surprising considering Indonesia has the largest Muslim population in the world. Istiqlal is located across the street from the Jakarta Cathedral and close to MONAS. 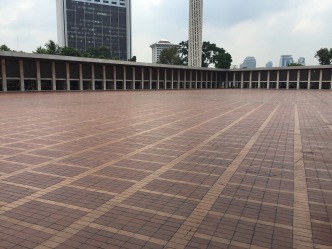 The mosque opened in 1978, and is open to the public for tours. On my tour, I was told that part of the reason why Istiqlal is located so close to the Jakarta Cathedral is that they wanted to demonstrate that Muslims could get along with other religions.

From the outside, I could never really get a good picture, but you can tell that it is an imposing structure.

The mosque is six stories high, and is separated into a men’s and women’s prayer section. Prayer can be performed both indoors and outdoors.

I do think it’s worth a visit when in Jakarta.