The Grand Hyatt Jakarta overlooks the iconic Selamat Datang Monument, and is great for shopaholics as it is attached to the Plaza Indonesia Mall and across the street from the Grand Indonesia Mall.

Upon exiting the escalator is the front desk. I was quickly checked-in to my room. I used a Diamond Suite upgrade certificate for this stay, and was placed into the Grand Suite.

Upon entering the room, a guest bathroom is located directly to the right.

Just to the left of the entryway is a small dining table. Beyond that is the coffee maker and 6 bottles of water.

Proceeding straight from the entry is the living room which had a sofa, chair with ottoman, another ottoman, a coffee table, and an end table.  A bowl of fruit was also sitting on the coffee table.

In the corner of the living room was the desk, and mini-bar.

A TV was hung on the wall facing the door, but could be seen from both the desk and sitting area.

Waiting on top of the desk were two boxes of peanuts, and a box of chocolate cookies.

Next to the desk were items that could come in handy, such as paper clips, binder, stapler, and Post-Its.

The bedroom featured a king bed with a bench at the foot of the bed. A rack to hang your jacket was also provided.

The bedroom had a small TV, but there was a door that separated it from the living room. 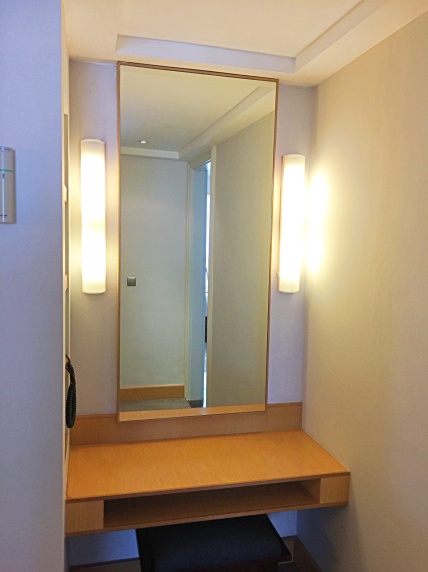 The walk-“through” closet was huge, with drawers, two sets of racks to hang your clothes, a place to store your luggage, iron, ironing board, and robes.  There is a vanity mirror also located inside of the closet.

The closet also led to the master bathroom which contained two sinks and a large tub.

The toilet and bidet were in a separate enclave.

The shower featured both a handheld nozzle, and rainfall showerhead. June Jacobs products were featured, which are not my favorite. 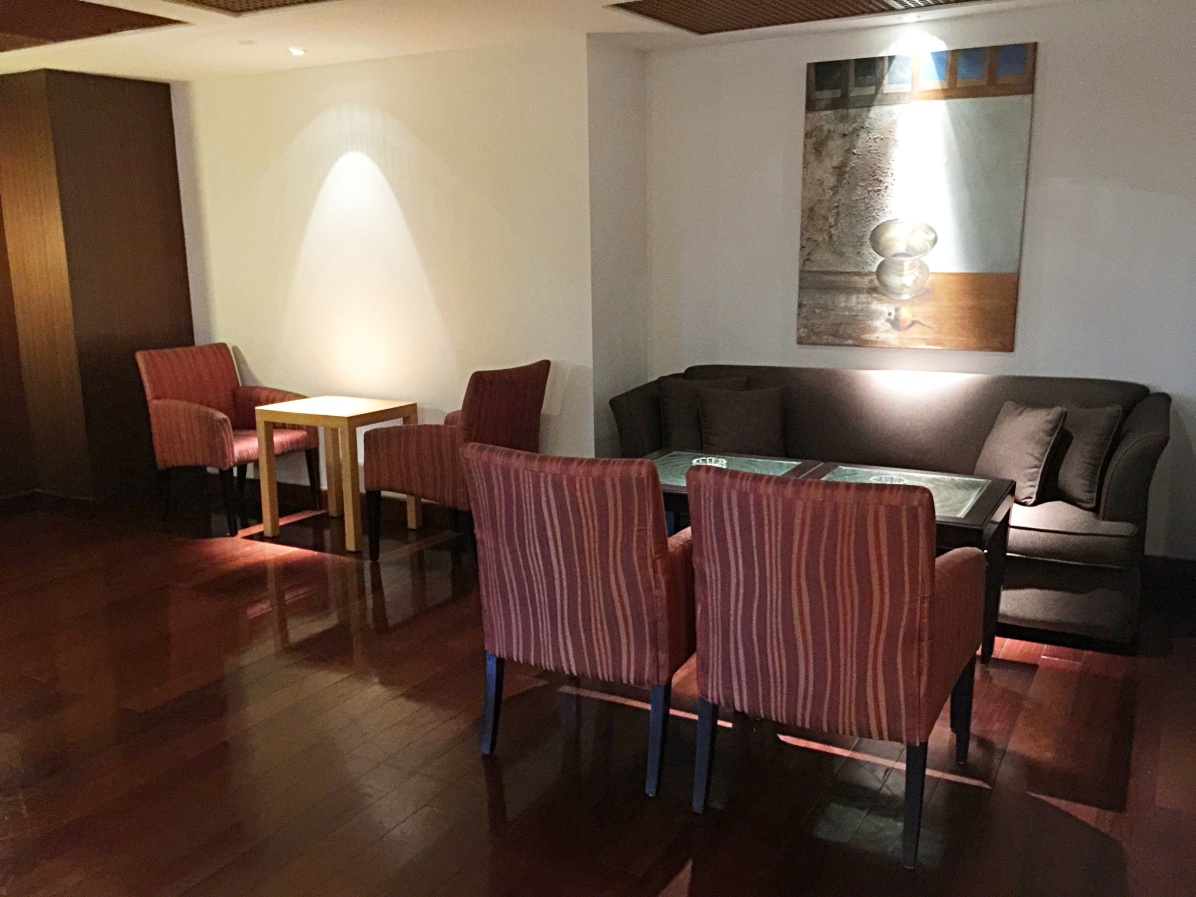 The Grand Club is located on the 22nd floor. I did not eat breakfast here during my stay, as I was given the option to have breakfast in the restaurant, which I thought was a much better option. The Grand Lounge is rather long and narrow. Tables are located throughout the lounge with a few couches sprinkled throughout. 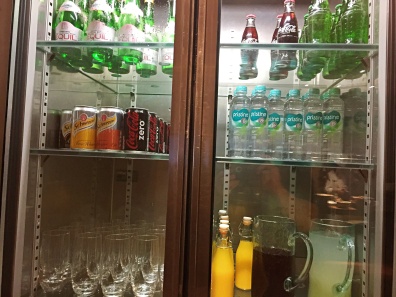 Daytime offerings were rather sparse, and included fruit, cookies, and drinks.

Evening offerings include a “featured dish” that was located next to the entrance. One night it was Peking duck, another night was a whole fish. 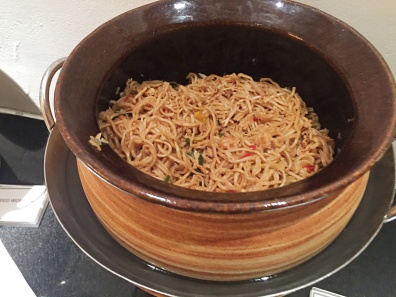 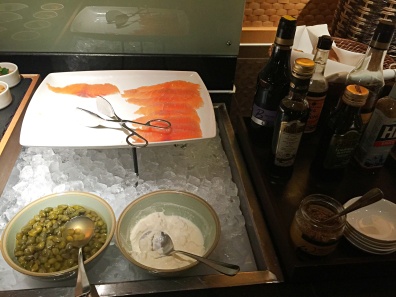 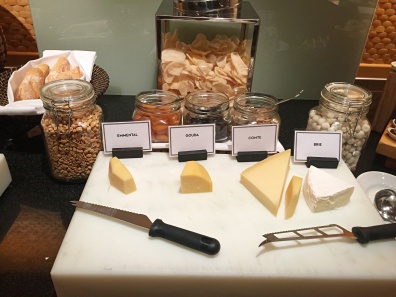 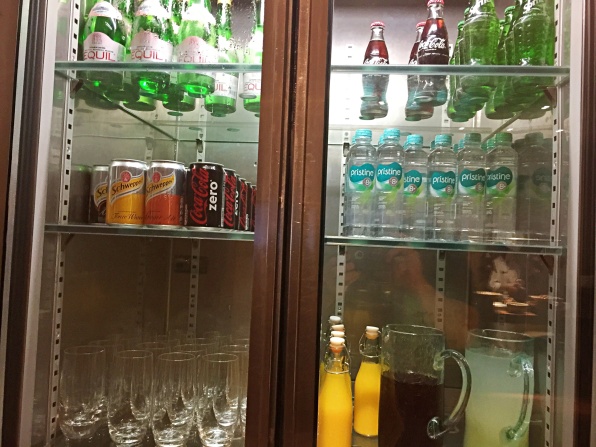 There were three other hot items offered each day, along with sandwiches, salads, assorted appetizers, bread, cheese, sushi, and dessert.

I chose to have breakfast in the Grand Café. I tried taking pictures of the buffet my first morning but was stopped by the “Picture Nazi”. She started yelling and waving her arms telling me no pictures were allowed. There were no more than 5 guests in the restaurants, and perhaps she was concerned that I was taking pictures of other guests. In my opinion, this policy only hurts the restaurant, and hotel, instead Why wouldn’t potential guests/customers want to see what the restaurant had to offer.

The breakfast buffet included Asian, Western, and Indian options. In addition, you could have eggs prepared any way you liked as a Diamond member.

The pool area looks more like a Balinese resort, rather than a city hotel. There is a nice A-frame building when entering the pool area which has some Indonesian art decorations throughout. 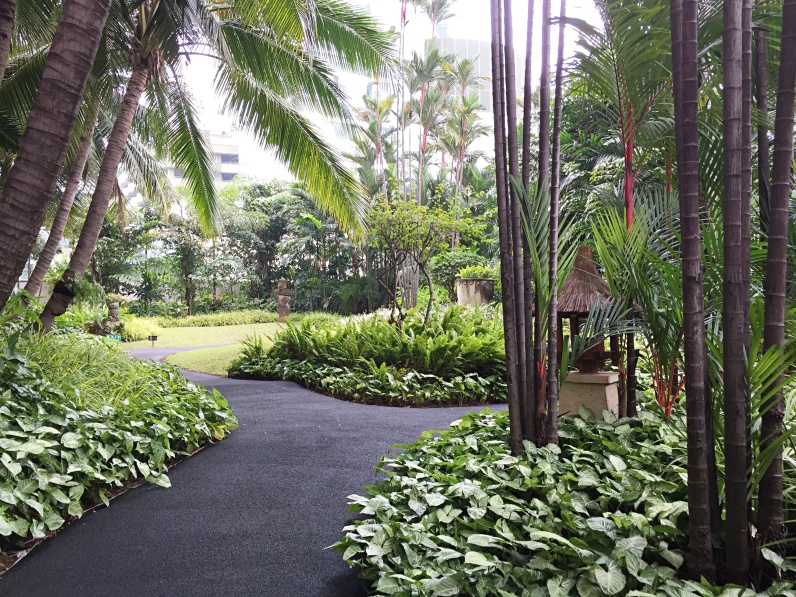 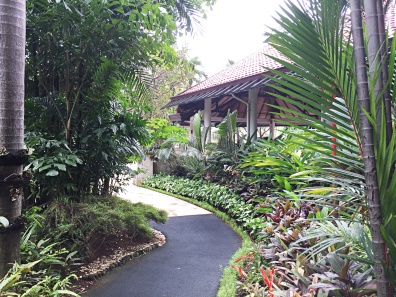 There is a garden-like section.

There are outdoor beds available. 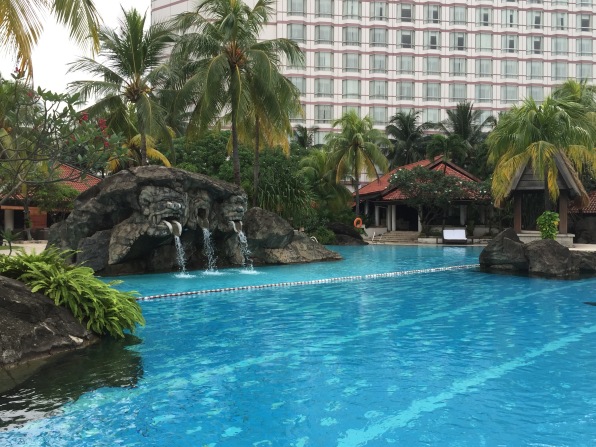 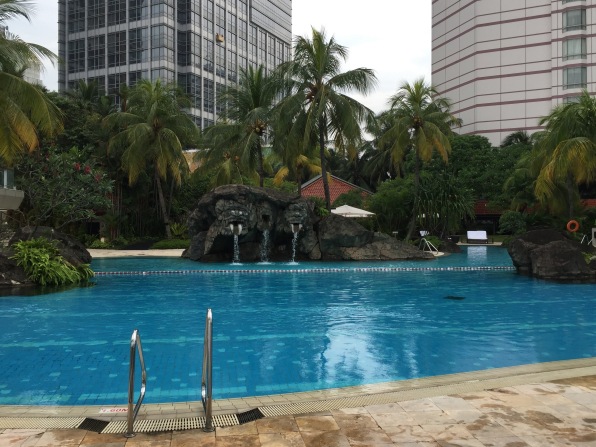 The pool is actually fairly large. The main feature might be the the “3 idols” from which water spews from their mouths.

There is also a Jacuzzi area.

There is also a swim up bar, which was not in use during the time of my visit.

There is also seating away from the pool area.

The gym is one of the most impressive I have seen for a hotel gym. 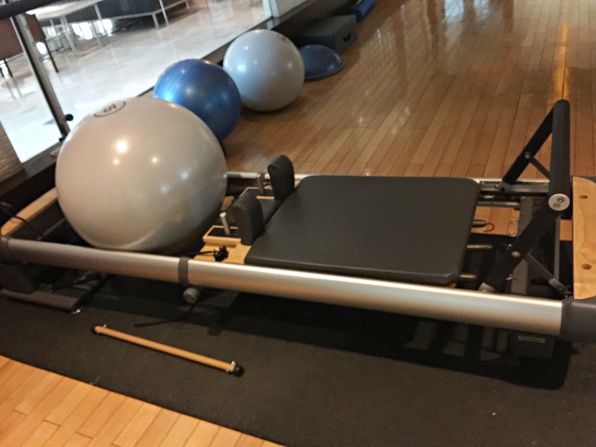 There is a separate cardio room which featured a Pilates table, kickboxing bag, dance bars, and yoga mats.

There is also a café/sitting area.

The men’s locker room was impressive with plenty of lockers in a large open space.

There is also a lounging area within the locker room.

There is a Physical Therapy office located next to the gym, but I am sure that is not included in the room rate.

The Grand Hyatt Jakarta is centrally located, and convenient to many restaurants, and of course shopping.