After arriving in Hong Kong, I decided to take the A21 City Flyer bus. Yes, the Hong Kong Airport Express is the much faster option in most cases, and you won’t have to deal with traffic.

Two things swayed my decision. I was arriving close to midnight, so traffic wouldn’t be an issue. Second, and maybe more importantly, I was staying at the Hyatt Regency Tsim Sha Tsui, which is not close to any station that the Hong Kong Airport Express makes a stop.  The bus stop is easy to find after exiting immigration.  Just follow the signs for ground transportation.  Once you exit the airport, there are ticket windows where you can buy bus tickets or an Octopus Card.

The A21 City Flyer bus however, almost drops you off at the Hyatt’s doorstep. The double decker bus has plenty of seating, and space to store your luggage. If you decide to sit up top, there is a video camera showing the luggage area intermittently. The bus also offers free WiFi.

The ride took about an hour. With a cost of 33 HKD ($4.25) each way, it beats the pants off of the Hong Kong Airport Express at 100 HKD ($12.90). You can either pay with an Octopus Card or cash, but I have read that the driver will not give you any change if paying cash.  The thought of not having to switch trains, and a two-minute walk was much more appealing than the maybe somewhat faster Airport Express, but a long walk from the East Tsim Sha Tsui station.

When taking the A21 City Flyer bus from the Hyatt Regency Tsim Sha Tsui the stop is directly across from the Cartier store on Mody Road.

The bus stop has clear and easy to find signs. The first part of the journey back to the airport will take a while due to traffic, but once out of the city things clear up nicely. 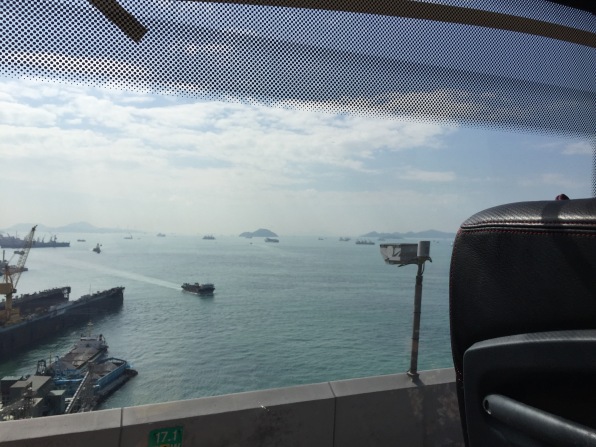 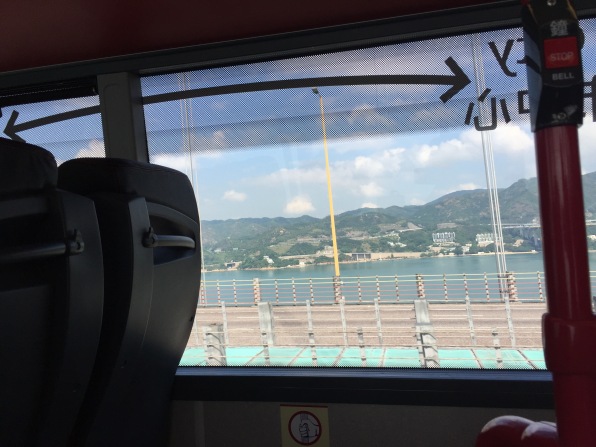 You will also have some nice views of the city and harbor.

The journey to the airport was a little longer at nearly 1 hour and 10 minutes, but the A21 City Flyer might be a better option depending on your final destination.