Upon entering the Hong Kong International Airport, I checked and found out that the Ethiopian Airlines check-in counter was in “Row U”.

Upon checking in, I was given a Premium Lane certificate to go through the immigration line.

After leaving the Thai Royal Silk Lounge, it was a quick walk to the D3 gate, where my flight to Kuala Lumpur was departing. This is a somewhat cool flight, as it is a “Fifth Freedom” route for Ethiopian Airlines.

When booking the Bangkok to Kuala Lumpur flight, all of the options were fairly expensive which I found somewhat odd as intra-Asia flights are generally pretty cheap. I continued to monitor fares for a few weeks but there was no change in rates. I ultimately booked this flight for a couple of reasons, those included not seeing too many reviews of Ethiopian Airlines, along with this being a fairly new 787 as this route has been operating with this plane since approximately May.

Shortly after arriving at the airport, it had started to rain intermittently. Ultimately, the flight arrived late at the gate. Although passengers departing from Addis Ababa do not depart the plane if going onto Kuala Lumpur, the plane was delayed arriving and while on the ground.

Upon boarding, the cabin was already ~60% full. The striking green and gold color scheme stood out.

Waiting at my seat was a small pillow.

Fortunately, I had the whole row to myself for the short flight. Legroom wasn’t too bad in economy, especially having an empty seat next to me.

Each seat has a footrest, which I hardly ever use.

There is an IFE on the back of each seat, as well as a USB port at every seat. 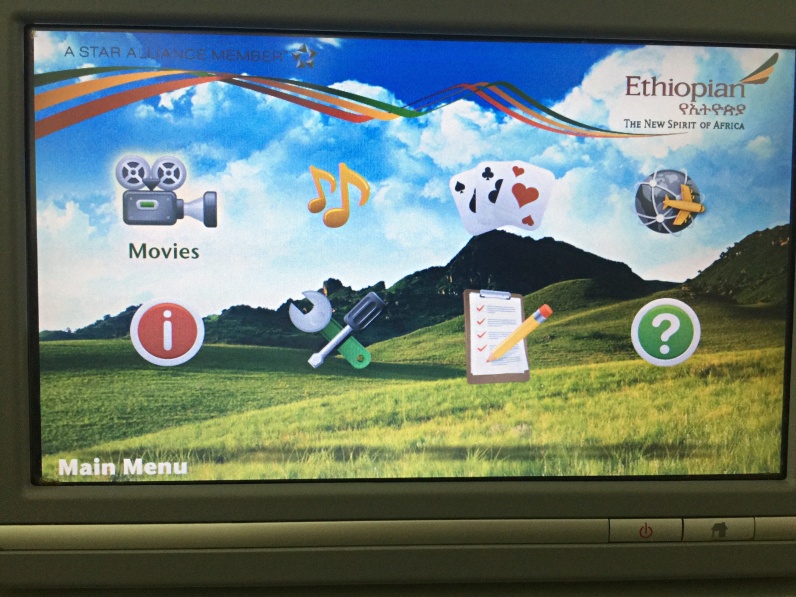 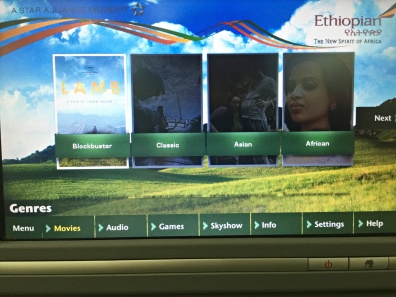 The entertainment choices were rather limited. You would have a hard time finding things to watch on a long haul flight.

I was surprised that a full meal was served on such a short flight.

There was a salad with Italian dressing. The entrée was chicken with mushroom, potato au grating, and vegetables. The chicken wasn’t too bad, but could have used some salt. Dessert was an Asian style mocha cake with raspberry sauce.

Alcohol was served in economy during meal service.

The service was professional but not too friendly.

Due to the weather and late departure, we were placed in a hold pattern for nearly an hour.  Once the plane landed in Kuala Lumpur, the flight was nearly two hours late in relation to the estimated arrival time.  Since I had the first flight out the following morning, I didn’t have as much time in the city as I would have like.

Although Ethiopian wasn’t too bad on this short flight, I’m not sure I would want to fly them long haul given the limited entertainment choices.