It has been a couple of years since I last reviewed the Hyatt Place Ontarior/Rancho Cucamonga. A lot has changed since that time. The hotel has a new owner, and most of the staff has been replaced. It does appear that a refresh of the hotel has been done however.

Upon entering the hotel, the front desk is slightly to the right. I was quickly helped, but it took about 15 minutes to get checked in. The front desk associate saw my reservation, but then checked her computer and probably called the shift manager about my reservations. I’m not sure what the problem was as it was never explained to me. It’s not like I was getting upgraded to a suite, since this Hyatt Place doesn’t have any.

I was eventually assigned to room 315.

Upon entering the room, there is an L-shaped couch with two ottomans, and small table to the right.

To the left is a small counter with sink. There is a small coffee maker as well.  A small refrigerator is located under the counter.

The desk is located opposite of the small counter, which is on the smaller side, but functional.

There is a semi-partition between the couch and desk area to the bed. The bed is on the firmer side, but still comfortable. There is an in-room air conditioner rather than central air conditioning. The air conditioner is rather loud but does cool the room quite well.

The bathroom is split into two parts. The sink is located in the room.

The bathroom has a toilet and shower with a fully enclosed door, which is something new. Previously, the showers had the dreaded half door.

The bathroom was on the dirty side, as there was something unidentifiable on the floor.

The gym is located on the ground floor. It is rather small, with little equipment, but good enough for a quick work out.

Towels are provided, as ear headphones, which is a nice touch. There is also a water cooler. 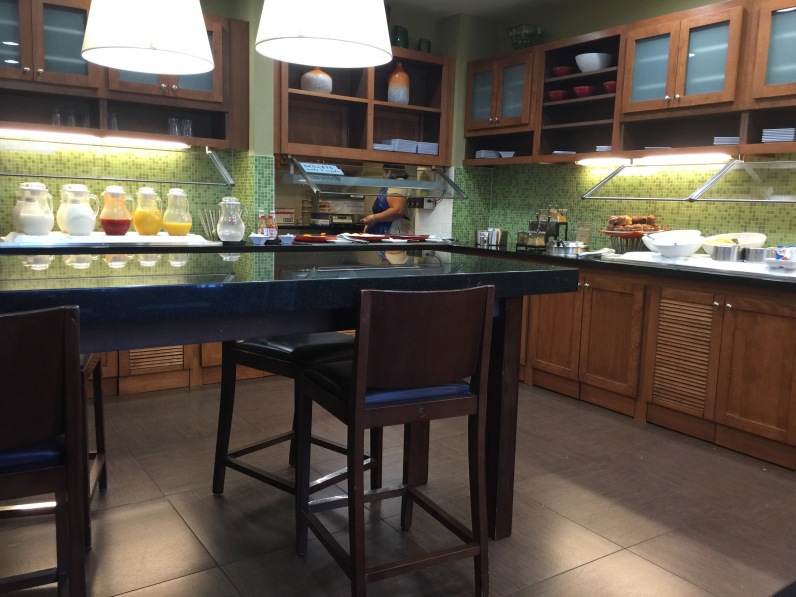 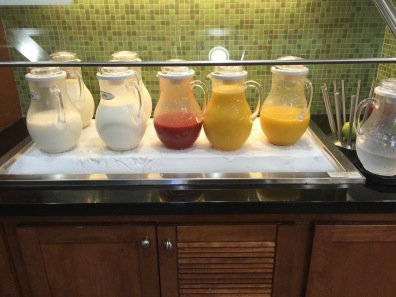 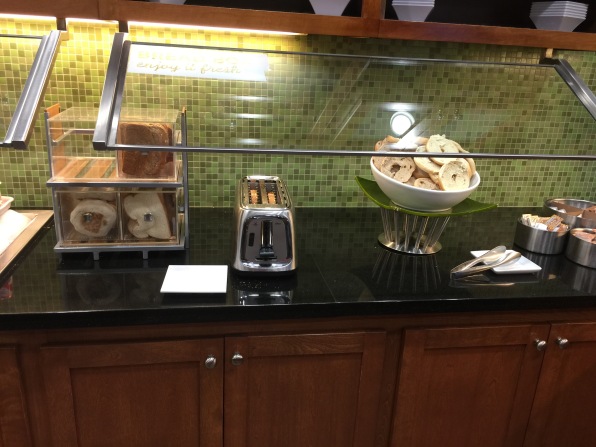 Breakfast is complimentary for all guests. Hyatt Place has their “Signature Skillets”. On this day, there was something that resembled an Egg McMuffin, both as a complete sandwich, and an open faced sandwich. There are also pancakes, juice, fruit, bread, pastries, yogurt, and oatmeal.

There is a separate coffee station.

The cereal is also located away from the main dining area.

The pool area is on the smaller side, but it is nice that there is a pool.

The hotel is undergoing some changes with a new owner, and new staff. It seems that they are going through some growing pains.